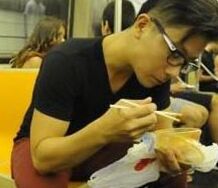 Recently in many cities, such as Shanghai, Nanjing and Wuhan, passengers are not allowed to eat or drink on subways, and violators shall be fined. Should food and drinks be permitted on subways? The debate has been raging in China for a long time. Governments and passengers show different attitudes. Read carefully the opinions from both sides and write your response in about 200 words, in which you should first summarize briefly the opinions from both sides and give your views on the issue.

YES
According to the laws and regulations, items that pose threats to the security of passengers cannot be taken to the subway. However, food and drinks will do no harm to the passengers’ safety, and therefore should not be forbidden. Besides, it is every citizen’s right to eat and drink during public transportation. This right should not be deprived of by the government.

When passengers have to travel on subways for nearly one hour, it is necessary for them to eat some snacks or drink some water. If food and drinks are forbidden, it will cause inconvenience to some elderly passengers and children. In addition, many young people have to eat their breakfast on the subway when they go to work in the morning in order to save time. The new regulation will also affect their normal life and work.

It is every citizen’s responsibility to build a clean and healthy public environment. Some passengers bring food and drinks to the subway, and leave litter everywhere. This inappropriate behavior makes the subway look messy and untidy. For citizens and tourists who travel on the subway, they will inevitably have a terrible impression of this city.

The subway is a relatively closed space, and therefore any unpleasant smell can easily spread inside the subway and cause uncomfortable feelings among passengers. Some food and drinks, such as the steamed buns or some other traditional Chinese breakfast, often carry strong smell. Although for people who are eating and drinking, it is of no harm, for others, the unpleasant smell may make them feel sick.

Should Passengers Eat and Drink on Subways?

In recent years, eating and drinking on subways has been found more and more common, which has triggered many problems. Thus, some cities forbid passengers doing this and violators will be fined. Along with this new regulation comes a raging debate where two opposite attitudes have been shown. Some believe that eating and drinking doesn’t have direct relation to the safety of the subway operation and does not violate any laws and regulations. Others want to curb this behavior so as to make the public environment clean and tidy.

As far as I am concerned, eating and drinking on the subway is indeed not a proper behavior, but it is also not reasonable to deprive citizens of that right. On the one hand, eating and drinking on the subway should be discouraged. The government should attach more importance to educating citizens and appeal for cultivated and eco-friendly behavior on public transportation. Announcement and posters could be used to encourage people to create a better environment. On the other hand, it is every citizen’s legal right to eat and no one can deprive them of that. With regard to the pregnant, the elderly, the sick and the weak, the government can allocate special room for them to eat and drink inside the subway.

In conclusion, the behavior of eating and drinking on subways should be discouraged, but the right of certain people should be protected.